Kimerah is a bright, bubbly girl from Christchurch whose outgoing nature and inquisitiveness are typical of a three-year-old. But Kimerah has had to endure more in her first years of life than most toddlers. Born profoundly deaf, she has had to learn things differently than a child in a hearing world, though she hasn’t let this slow her down.

Thanks to the power of the cochlear implants that she received at nine months of age, Kimerah has thrived; because she can hear with the technology, she has been able to learn spoken language to communicate with those around her. This hasn’t been without its trials though, and her mother, Jaime, describes their journey as a marathon. 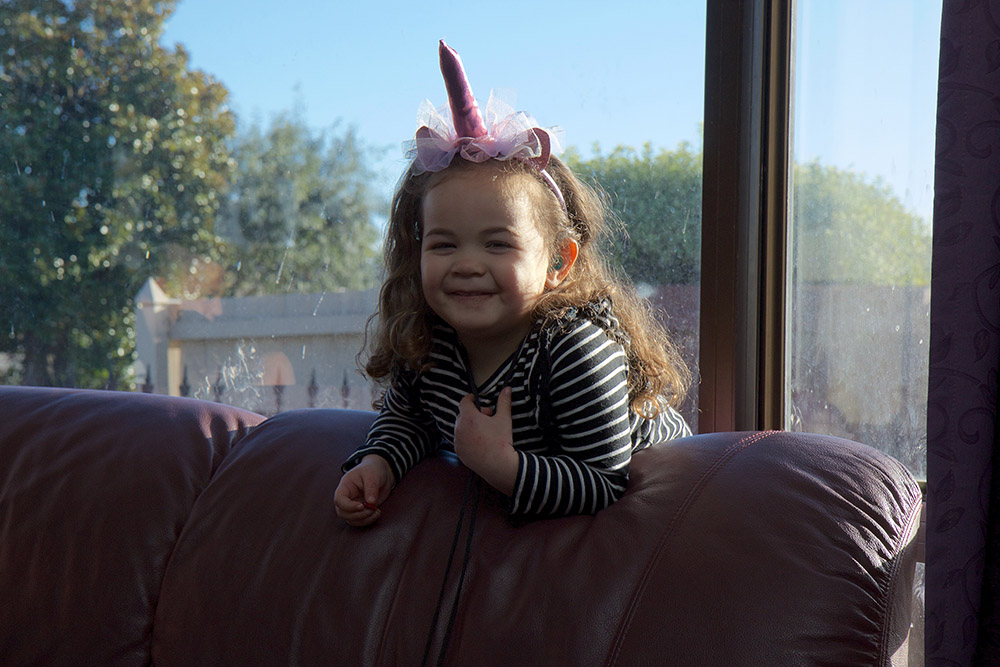 The news that Kimerah was deaf came as a shock to her family and the realisation was a wash of emotions. Kimerah was the youngest of four, her siblings had no issues with their hearing, and they had no idea what to expect.

“They first suspected she might have had a problem with her hearing at the newborn test, which happens in a baby’s first 48 hours, says Jaime. “They had just switched the testing machines so when she failed I thought perhaps they weren’t familiar with the new equipment and I wasn’t concerned. So, we continued on with Kimerah as we had our other children, singing, laughing, talking, encouraging. Not once did I really believe something was wrong as she was reacting like all our other kids. I thought to myself, as her mother, I’d know if she was deaf.”

But after more failed tests, Kimerah had a specialist appointment at Christchurch Hospital when she was nine-weeks old which gave Jaime a definitive answer. “I could tell from the specialist’s face that something wasn’t right,” she says. “From that moment on I knew everything would be different. I instantly felt like our relationship had been severed. I had been doing all the things I had been with the other kids and to know she hadn’t heard me was heartbreaking.”

Jaime was told that cochlear implants were the only viable option to enable Kimerah to hear going forward. Without them, Kimerah wouldn’t be able to hear at all – hearing aids would not have worked for her level of deafness as they only amplify sound and her cochlea, the part of the ear than communicates sound to the brain, was malformed.

It was then that the John family met the team from the Southern Cochlear Implant Programme (SCIP) and thanks to their reassurance, the decision to implant Kimerah was an easy one. “They made us feel comfortable with the idea of the procedure and the opportunities it would open up for Kimerah,” says Jaime. “Without cochlear implants, she would have had more difficulty learning spoken communication and hearing related tasks would have been harder.

“We acknowledged she was deaf and that would always be a part of her, but we wanted to give her the opportunity to communicate using spoken language with those around her.
The gift of hearing is precious. We didn’t know what her journey to get there would entail, but we knew it was what she deserved.”

So, at nine-months old, after spending her first milestone moments without hearing, Kimerah underwent a five-hour surgery to receive bi-lateral (two) cochlear implants. A few days later she was ready for her ‘switch on’, the moment when the technology is activated. “We were anxious for her and didn’t know how she would react,” says Jaime. “I stood behind her and clapped and said her name and she turned around instantly!

“From there, it was just life-changing. She progressed so well and started to hit developmental milestones like any other child. With help from the SCIP team and a lot of hard work from her, she has learned to speak and now is at a level of any other child her age. We went through a multitude of appointments and it was hard and emotional – we never knew what to expect each time, if she was doing as well as she could be and what her prognosis was.” 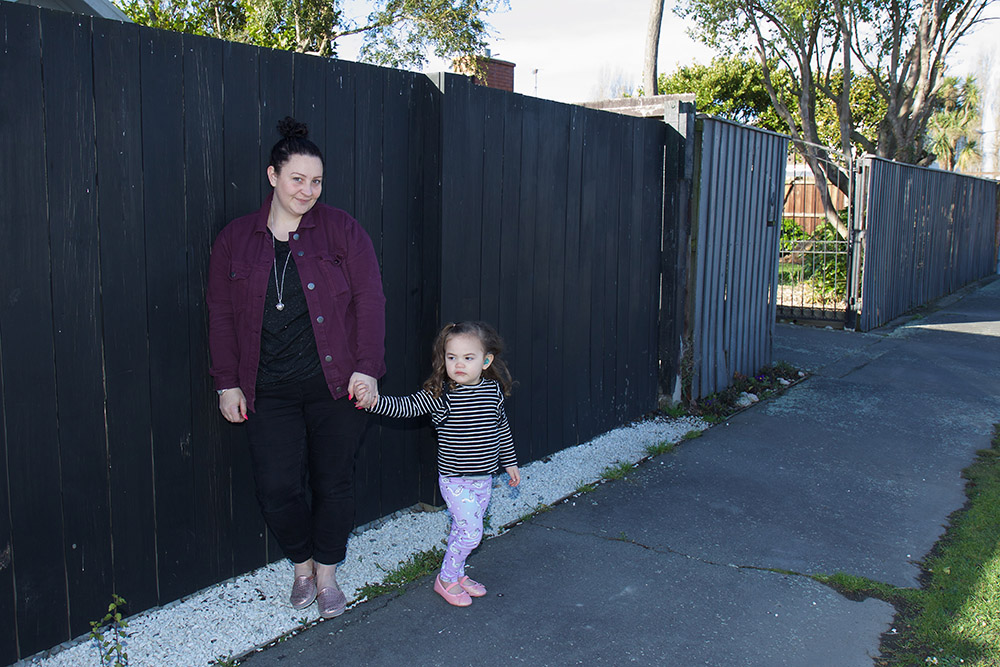 Two years on, and to look at Kimerah, you wouldn’t see the challenges she has overcome. “Her results have been amazing,” says Jaime. “We have had to input a lot to get to where she is today – music, speech therapy, hours of habilitation, her learning to differentiate background noise from sounds she needs to hear, navigating pre-school. But she has done it all and it is incredible to think how far she has come, all because she has been given a tool to hear. The team at SCIP have become a huge part of our lives and journey and their support and the trust they gave us in her implants allowed us hope.

“I think without her cochlear implants she would have been out of control with frustration – she’s a strong child and not having spoken language within a family and community that is hearing would have impacted on things like friendships, schooling, and social interaction.”

For the John family, Kimerah’s cochlear implants mean a future filled with possibility. “I am not concerned at all now that she is deaf,” says Jaime. “With implants, she is just so capable and really is moving mountains. I am excited for her every day and what she will achieve.”

This year, we celebrate the fifth year of the partnership between the Southern Cochlear Implant Programme (SCIP) and Mutual Credit Finance. The start of the partnership came about in 2017 when the MCF board table started discussing giving back to the community by way of sponsorship of a worthy cause.Once MCF Chairman David Tier and MCF Chief Executive Clint Barry met the SCIP team and SCIP’s work was more deeply understood, it was clear the right partner had been found. MCF chose to support the programme with an annual commitment of funding for an initial period of five years.“We wanted something in the medical sector, something that had synergy and affinity with our vision and values, and something that would be seen as a long-term, strategic partnership as opposed to just giving money at any particular point in time,” he says.“SCIP is a very small part of the whole medical world – you could consider it operates in a boutique space that is its own. MCF is the same in the finance world. We’re not trying to be everything to everybody. We fill a niche.“Everyone at SCIP is reputable and trying to do the right thing for the right reasons. That’s like us, and it just felt right,” David says.MCF is based in Christchurch and has been operating for nearly 70 years having been established in 1956 as part of a Christchurch accountancy practice.Thank you MCF for all your support! If you or your organisation would like to support SCIP, we welcome your call. Please contact Belinda van der Monde (Community Relationship Manager) – belinda.vandermonde@scip.co.nz or visit our website www.scip.co.nzIf you’d like to know more about MCF, visit www.mcf.co.nz.Pictured: MCF CHair David Tier with SHCT Chair David Kent. ... See MoreSee Less

Meet Liam Melvin - a positive young 16-year-old who enjoys learning, loves being a part of the IT crew at his school Wellington College, New Zealand and participates in the Halberg Games when he can.Liam was born very prematurely at 26 weeks gestation and both hisprofound deafness and mild cerebral palsy are linked to that difficult start to his life.He was 14 months old when he had bilateral cochlear implant surgery. While one cochlear implant was covered by Government funding, his parents Mark and Susan Melvin chose to self-fund the second cochlear implant as their research led them to believe that would be best for Liam. (It’s only since 2014 that bilateral cochlear implants are funded for children.)Liam was one of the first children to have behind-the-ear speech processors rather than the little backpacks.Now, Liam is in Year 12 at Wellington College and his favourite subjects is digital technology, and is part of the school's IT crew, helping fellow students when they have issues with their Chromebook or Wi-Fi and taking care of the audio/visual requirements for school assemblies and presentations. Thanks for sharing your story with us Liam. If you would like to share your cochlear implant journey, we'd love to hear from you. Contact us via our website www.scip.co.nzPictured: Liam Melvin and his parents Susan and Mark Photo: Lance Lawson Photography ... See MoreSee Less