Before receiving her cochlear implant, Michelle describes her life as ‘living every day on the precipice’. Today, she is a high-achieving sales specialist for Adgraphix, a Christchurch signage company who she approached about a job five years ago when she learned she would be able to regain her hearing and through her implant could return to being an active member of the workforce. 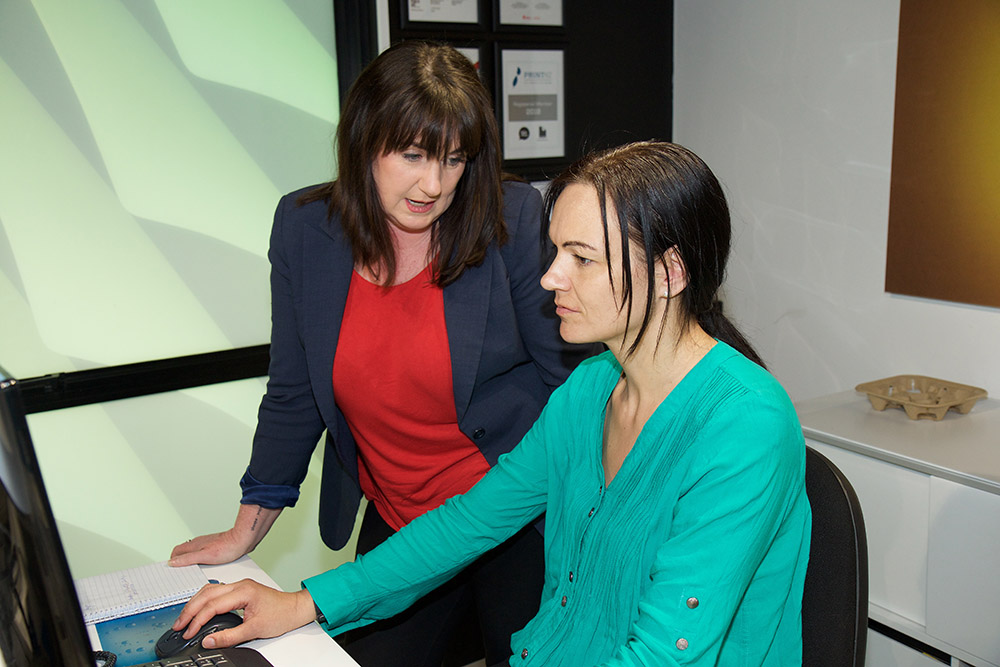 For Michelle, her life was her career. She has been in the signage business since she began working, though on reflection, her dedication to the industry also contributed to her hearing loss. “I think I realised I had a problem when I was around 26,” she says. “I went for my first hearing test then but it wasn’t until I was 30 I really acknowledged it was an issue. I got my first set of hearing aids at that time on ACC because it was thought the years I had spent working with signage machinery had damaged my hearing.”

This was the start of a journey to find something to ease the struggles Michelle was having as a significantly hearing-impaired person, trying to live and function normally in a hearing world. “I remember how uncomfortable those hearing aids were,” she says. “At the end of the day I would get home and throw them on the bench. I preferred not being able to hear to the discomfort they brought me.

She later saw an ad in the paper for newer technology and was fitted with different hearing aids, but this still wasn’t a perfect solution and her hearing continued to diminish. She endured five years of ‘just getting by’, with each day becoming harder than the last.

“I finally decided to go it alone and work for myself because I really felt like I wasn’t employable,” she says. “I could no longer answer the phone or communicate with clients properly and it was damaging my ability to work. The hardest part was not being able do the quantity or quality of work that I had been able to. I became terrified of my phone, and for a salesperson that tool is paramount. I was coping by lip reading and others were compensating around me by not correcting me if I didn’t hear something.”

In this time too, Michelle also met her partner, Craig, and the pair moved in together with his pre-teen children. It wasn’t long before Craig realised how much of a toll Michelle’s hearing loss was having on her life, and the affect it was to have on him. “She would get home at the end of the day and take herself into another room to escape,” says Craig. “Just trying to get by was physically and emotionally draining for her and she couldn’t cope with more ‘noise’ she would struggle to interpret.

“It was hard on me and the kids too. All we wanted to do was spend time with her, talk about our days and sit down and have dinner together, but that became impossible. Even going out with friends was tough – we couldn’t go anywhere with bad acoustics, we’d have to shuffle round seats with people to help her at least hear something and in the end, we just stopped attempting it.”

“I thought it was normal,” says Michelle. “But in reality, I was isolating myself because I didn’t have the strength to manage interaction anymore. It really hit home at one of Craig’s work dos. I took a sleeping bag and a tablet with me and after a short time inside with everyone, I excused myself to go to the bathroom but instead I went and sat in the car for half an hour or so to regroup. I had to do that three or four times throughout the night just to endure a few moments inside trying to be a part of a group situation.

“By this point, my life was slipping through my fingers. I was on the edge and if I wasn’t a strong person by nature, I’m not sure how I would have coped. I thought I could hear but in reality I had just learned tools to get by as a deaf person. I hadn’t realised how bad I really was, but the ‘hearing’ was all in my head and was just memories of what I’d had before.”

“We all have days that are challenging and that’s tough enough, but when you are taxed by not being able to communicate properly the stress and hardship goes up even further,” adds Craig.

It was lucky for Michelle, that a check-up with her audiologist in 2010 gave her a glimmer of hope that there might be a solution to help her. “She suggested I be referred for cochlear implant assessment,” says Michelle. “I didn’t really know what it was all about, but I was willing to try anything.”

Michelle was placed on the waiting list and by the time she was able to be assessed by the Southern Cochlear Implant Programme (SCIP) it was confirmed that she was profoundly deaf. Then came a two-year wait. “I kept quiet and soldiered on,” says Michelle, but I knew I was in trouble and so eventually I wrote a letter about how it was affecting my mental health. It was extremely hard to verbalise, but I thought it was important to speak up because I was living my days on the precipice.

So, when the day came that a letter arrived in the mail from SCIP telling Michelle she was going to receive an implant she was filled with excitement, some trepidation and hope. But, now armed with a solution, she immediately made steps to regain her life and headed straight to Adgraphix. “They had been a supplier of mine previously and I just knew I wanted to work for them with restored hearing in the knowledge I could contribute fully again,” says Michelle. “I walked straight in and told them I wanted to work for them, and luckily for me, they wanted that too!”

With new plans on the horizon, Michelle underwent her surgery in March 2013 and still remembers the switch on that came on April 4. “I had moderate expectations as to how successful it would be,” she says. “But I was absolutely blown away by the results and the team at SCIP who stood by me through it.

“I walked outside and could hear birds, really hear them, not just a memory in my brain. My sister, daughter and I went out for a glass of champagne after that to celebrate and after I paid, I walked away from the register and heard the barman ask me if I wanted the receipt. I stood completely still; for the first time in years I had heard someone speak to me from behind!” 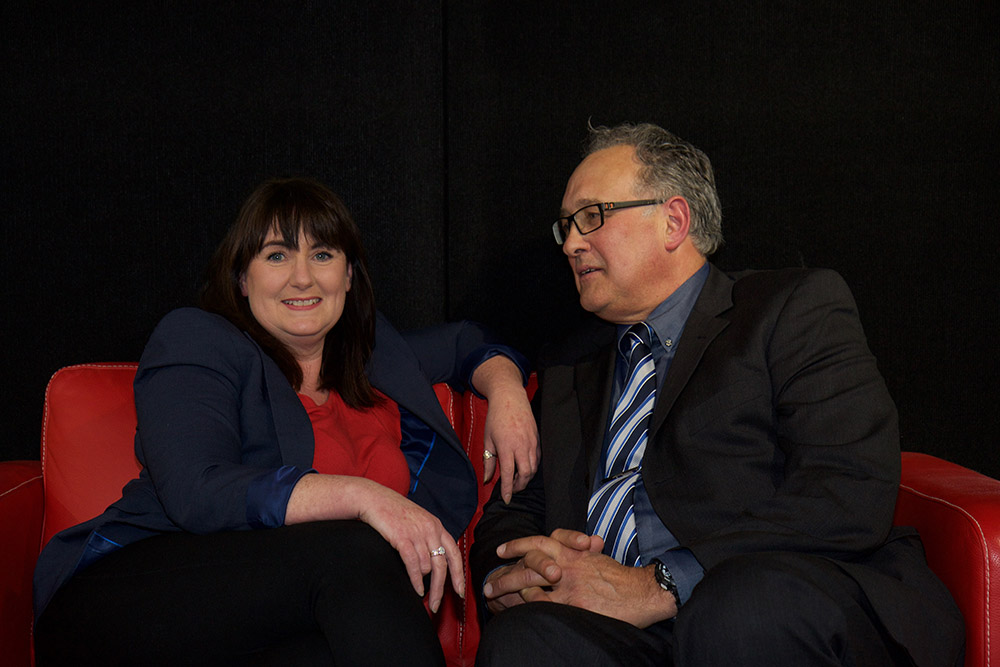 The impact on Craig too, was hugely emotive. “When I saw how she was reacting to things, the joy and the hope in her face, it was phenomenal,” he says. The realisation that it was working was a life-changing moment for us. The door was open to possibility.”

Michelle and Craig soon settled into life with renewed spirit; just doing simple things like cooking a meal together and talking over dinner at the end of the day became normal, whereas they had been impossible before. After about 18 months with her implant, Michelle had a ‘lightbulb’ moment. “I realised just how hard life had been without hearing,” she says. “I had been living in absolute survival mode and now I was just living.”

Today the couple enjoy a busy and rewarding life, working hard at their jobs, making the most of their huge garden at their Amberley property, going out for meals, making sure to catch up with friends regularly and simply being able to enjoy each other’s company.

“The implant has enabled us to simply be together and create a new normal, a new, fulfilling life where Michelle isn’t burdened by stress and hardship,” says Craig.

“My implant has given me a whole new world,’ adds Michelle. “Every day is joyous and I appreciate each and every moment – especially the small things. I am grateful every day; when I take off my implant receiver at night I am deaf again, but in the morning when I put it back on it’s like I am cured – it is truly a modern-day miracle.”

A new pair of smart glasses that let d/Deaf or hard of hearing people 'see' conversations has hit the market in the UK. The XRAI Glass turn audio into captions that are instantly projected in front of your eyes. Thanks to voice recognition capabilities, the glasses can even identify who's speaking, and will soon be able to translate languages, voice tones, accents and pitch, according to XRAI Glass.Steve Crump, Founder and Chair, DeafKidz International, said: “As a profoundly deaf person myself, I was blown away by this technology. When I tried on the glasses, I was astonished – real time subtitles that enable you to engage and participate as never before. I see XRAI Glass as a hugely positive force, and I can’t wait to work with the team to help bring this to life.”Read more about the XRAI Glasses here:https://www.businesswire.com/news/home/20220728005555/en/Would you use these glasses? ... See MoreSee Less

Here’s a fantastic book recommendation that may help give your child who is on their hearing journey a much needed dose of encouragement. "Now Hear This: Harper Soars with Her Magic Ears" by Harper Gideons and Valli Gideons shares the real life story of Harper’s navigation of hearing loss, and shares ways people can support a child who is deaf or hard of hearing who are facing any kind of diagnosis. Harper's witty approach to storytelling resonates with young readers and will surely inspire the people who love and support them.Thanks to the National Foundation for Deaf & Hard of Hearing for first sharing this great book.You can purchase it on Amazon here: www.amazon.com/Now-Hear-This-Harper-soars/dp/1642379026Do you have any reading recommendations for tamariki? We'd love to hear your suggestions!My Battle Call by Valli Vida Gideons ... See MoreSee Less

Toi Poneke Arts Centre in Wellington have announced a brand-new pilot residency program for d/Deaf, and/or disabled artists, with a call for submissions.The Toi Pōneke development residency will give the artist the use of a studio, access to a paid mentor of your choice, and support for your access needs related to the residency translation services as needed. At the end of the residency, there will be an opportunity to present a showing of your work to invited guests. Toi Pōneke staff will be available to assist with install or set up if required, and you will also be paid for your work. To apply, you must be d/Deaf and/or disabled person or identify as having a disability or impairment, and a New Zealand citizen or permanent resident. For more information, visit toiponeke.nz/events/deafdisabledresidency ... See MoreSee Less