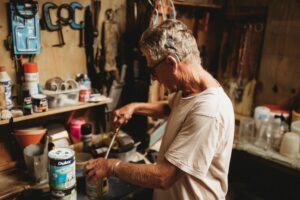 As more and more people receive a life-changing cochlear implant and hear again, International Cochlear Implant Day today 25 February is truly something to celebrate in Aotearoa in 2022.

In last year’s Budget the Government allocated an extra $28 million over four years for adult cochlear implants. The Southern Cochlear Implant Programme (SCIP) has performed 36 adult operations since 1 July, chief executive Neil Heslop says, and is well on the way to completing this year’s total allocation of 60.

“It’s brilliant that the extra funding has enormously impacted so many people and their families already. The cochlear implant technology improves their lives immeasurably and that means there’s an excellent social, community and economic return on the Government’s investment,” Neil says.

“On International Cochlear Implant Day it’s particularly important to acknowledge how the extra funding will transform the lives of many more profoundly deaf people in months and years to come,” he says.

Bruce Phillips from Pātea in Taranaki received his cochlear implant on 16 November, 2021, a day he will always remember. He had been on the waiting list for the surgery for three years.

“When I was deaf I limited what I did socially as I could not understand what people were saying. While I accepted that, it was tough for my family and friends,” says Bruce, who is 68 years old.

His deafness started about 20 years ago with a ringing in his ears, then he struggled to hear different sounds, then about 10 years ago he was profoundly deaf.

Now Bruce is back socialising at his bowling club and golf course, and talking to his three sons and three young grandchildren on the phone.

They live in Palmerston North, New Plymouth and Queensland, so for the past decade Bruce had to make do with text messages and emails.

He’s learning to adjust to his new cochlear implant every day and has regular follow-up sessions with SCIP’s post-implant rehabilitation service.

“When the team switched my implant on human voices sounded like the Daleks on Doctor Who – really echo-ey, and high and squeaky – but I didn’t mind as I could hear again!

“I came out of the building and I could hear traffic noise, which I hadn’t heard for 18 years, and immediately I was trying to work out the bird sounds – was that a sparrow, a starling, or a myna bird?

“A couple of days later I was home and I took my dog Sadie for a walk. She’s 10 years old and I had never heard her, and I could hear her claws tap tapping along the path,” Bruce says.
“Now my brain is getting used to different voices again and people don’t sound so much like robots!”.

You can read our press release about Bruce’s story here.

Today is Matariki, when we see the Matariki star cluster rise and become visible just before the sun wakes. This special time of year signifies Māori New Year and is a time to reflect on the year that was, celebrate the present and plan for the year ahead. Traditionally, Matariki marks when the autumn harvest was complete and the storehouses were full, leaving free time for relaxation and family. This is why Matariki is a time for coming together for renewal and celebration, and was marked with ritual fires, sacred offerings, and celebrations to farewell those who have passed on, honour ancestors and celebrate life. This Matariki, SCIP are giving thanks for the incredible cochlear implant technology that has changed the lives of hundreds of Kiwis with hearing loss, and an opportunity for us to look forward to the year ahead and continue to give the gift of sound to those in need. What are you celebrating this Matariki?You can find out more about Matariki at the Te Papa website below. www.tepapa.govt.nz/discover-collections/read-watch-play/maori/matariki-maori-new-year/whare-taper... ... See MoreSee Less

***** Update on Queens Drive Services *****Further to our Facebook post from earlier today, the building which we occupy is closed until what will probably be early next week (the week beginning 27 June) while the landlord cleans and ventilates the remainder of the building after the recent fire.In the meantime we are making arrangements for patients with urgent appointments to be seen in our Christchurch clinic if necessary, or alternatively on a visiting basis if we can accommodate this. Some patients we may need to reschedule to a later date.If you have any concerns feel free to call our Christchurch clinic on 0800 500 405 or email reception@scip.co.nz or scip.wellington@scip.co.nz.Once again we apologize for the inconvenience.The SCIP Team ... See MoreSee Less
View on Facebook
· Share