In May of 2018, life for the Osborn family changed forever. Having lived with hearing loss that progressed to deafness for nearly two decades, Maree, a Christchurch grandmother, was given back the gift of sound through a cochlear implant and the impacts for her and her loved ones have been monumental.

Maree, born with full hearing, had been losing the sense for the past 18 years. Three years ago, she became profoundly deaf. “I started with having significant drops in my hearing,” says Maree. “I couldn’t hear my family properly; every day was hard and I developed coping techniques over the years to try and compensate for my hearing loss. I was lip-reading, making sure I was standing in front of people so I could get some sense of what was going on, and constantly straining to hear.

“What I didn’t realise was how much I was in denial and how bad it had got,” she says. “In recent years I isolated myself, I was too scared to leave the house, doing normal things like doing the grocery shopping or answering the phone became impossible. I avoided people because I was terrified they would ask me something and I wouldn’t be able to hear or respond. I lost friends, I lost my social life. I was living in a silent world, a world where I felt like I was a burden so I cut myself off.” One of the worst things for Maree was not being able to spend quality time with her grandchildren. “The relationship you have with them is such a special one and we were all missing out on that,” she says.

For Maree, a Teacher Aide, this isolation and lack of independence really began to take its toll and she had to leave her beloved profession and became more and more reliant on her husband, Bruce.

For him, it was heartbreaking to see his once spirited wife sink into sadness and fear. “It was painful to look at her and see her struggling,” says Bruce. “But it comes your ‘normal’. It took a lot of getting used to and we just had to carry on as best we could despite the challenges.

“In essence I became her caregiver, she couldn’t drive or go anywhere alone. Of course, I did everything I could for her, but it changes life as a couple completely when someone is unable to hear. I remember her nearly getting run over in a carpark and that was the straw that broke the camel’s back.” 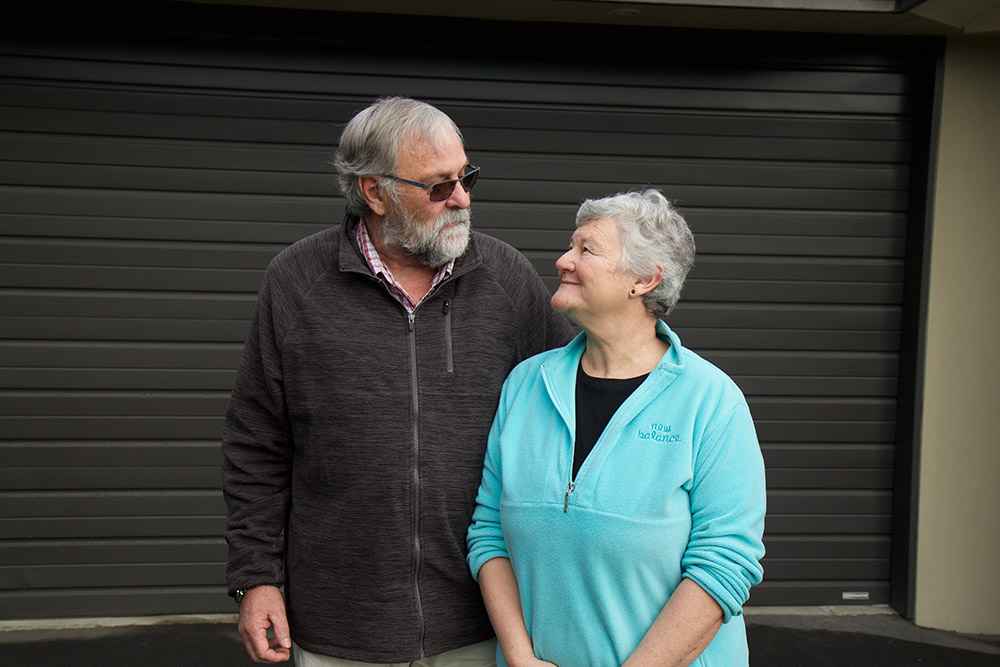 Finally, with Maree’s hearing completely diminished, the couple were desperate for a solution and were referred to the Southern Cochlear Implant Programme (SCIP). “I was anxious going into SCIP for the initial testing because I didn’t know what to expect,” says Maree. “Would an implant help me? Would I be able to hear again if I got one?

“I remember the team making me feel at ease and my fear then began to turn to excitement. I was on a waiting list for some time and that was hard, so when the email came in from SCIP saying that I was going to be able to get an implant I nearly fell over!”

“I don’t think I have ever responded to an email so fast!” says Bruce. “We were elated that something could be done to help Maree and we were hopeful of what it might bring.”

A few weeks later, and Maree was operated on. In the following days, she was anticipating her switch-on – the moment when the implant is activated and hearing is restored. “When it happened I thought I could hear a tweety bird,” says Maree, “but the SCIP staff told me it was voices and I was so excited!” It had been years and years since I had been able to hear my loved ones and to be able to do that again, and so quickly, was the best outcome I could have imagined.

“It was overwhelming, it was like getting my life back again. I walked outside and could hear the birds in the trees, the traffic, the sound of my own feet on the path. I had gone from complete silence to being able to appreciate the little things.

“I was just so thankful – I remember rushing back inside to thank everyone at SCIP and I just kept saying it over and over again. I couldn’t express how much it meant to me.”

For Bruce, he too was struck by the experience. “It wasn’t until that moment I realised the weight of Maree’s hearing loss had had on our family. It was like the whole thing had been lifted off our shoulders,” he says.” 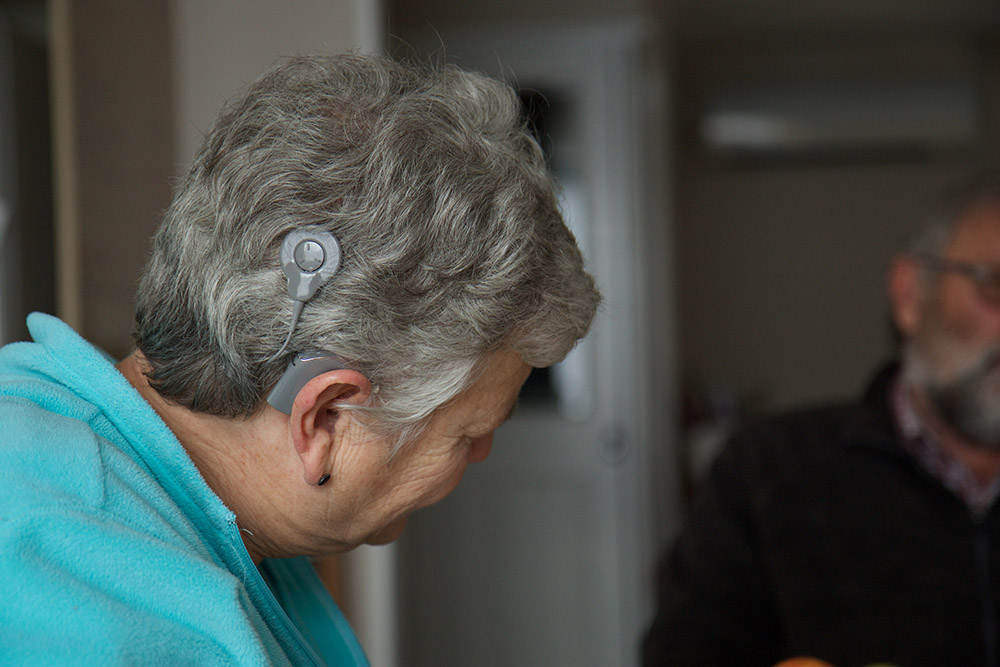 From switch-on, Maree is now on a rehabilitation journey. “It’s like your brain goes to sleep when it doesn’t need to interpret sound,” she says. “I am having to relearn how to differentiate sounds now, but with each appointment and the help of the SCIP staff my progress has been amazing.”

“The difference in Maree is phenomenal,” says Bruce. “Before we couldn’t enjoy things like other couples – going to the picture theatre, having the grandkids over to stay, going out with our friends. Now it is like we have a whole new lease of life, we’ve regained the past 18 years of our marriage and more. We are happy just to be able to do simple things and enjoy being together. And of course we feel younger!”

“Sometimes we even just go to the beach so we can listen to the waves crash against the rocks,” adds Maree. It seems like something so small, but it is hugely significant to me.”

With possibility now opened to Maree and Bruce, they are making plans to do all of the things they’ve been unable to do in the past 18 years. There is a holiday on the horizon – new places and people would have been unmanageable for a non-hearing Maree. And Maree is contemplating going back to work, something she truly loved. “I am not scared anymore,” she says. “To be able to contribute to my family and the community again is truly life-changing.

If you’ve had something, and it’s taken away, you really know what you have lost. To get it back again is nothing short of a miracle.”

This year, we celebrate the fifth year of the partnership between the Southern Cochlear Implant Programme (SCIP) and Mutual Credit Finance. The start of the partnership came about in 2017 when the MCF board table started discussing giving back to the community by way of sponsorship of a worthy cause.Once MCF Chairman David Tier and MCF Chief Executive Clint Barry met the SCIP team and SCIP’s work was more deeply understood, it was clear the right partner had been found. MCF chose to support the programme with an annual commitment of funding for an initial period of five years.“We wanted something in the medical sector, something that had synergy and affinity with our vision and values, and something that would be seen as a long-term, strategic partnership as opposed to just giving money at any particular point in time,” he says.“SCIP is a very small part of the whole medical world – you could consider it operates in a boutique space that is its own. MCF is the same in the finance world. We’re not trying to be everything to everybody. We fill a niche.“Everyone at SCIP is reputable and trying to do the right thing for the right reasons. That’s like us, and it just felt right,” David says.MCF is based in Christchurch and has been operating for nearly 70 years having been established in 1956 as part of a Christchurch accountancy practice.Thank you MCF for all your support! If you or your organisation would like to support SCIP, we welcome your call. Please contact Belinda van der Monde (Community Relationship Manager) – belinda.vandermonde@scip.co.nz or visit our website www.scip.co.nzIf you’d like to know more about MCF, visit www.mcf.co.nz.Pictured: MCF CHair David Tier with SHCT Chair David Kent. ... See MoreSee Less

Meet Liam Melvin - a positive young 16-year-old who enjoys learning, loves being a part of the IT crew at his school Wellington College, New Zealand and participates in the Halberg Games when he can.Liam was born very prematurely at 26 weeks gestation and both hisprofound deafness and mild cerebral palsy are linked to that difficult start to his life.He was 14 months old when he had bilateral cochlear implant surgery. While one cochlear implant was covered by Government funding, his parents Mark and Susan Melvin chose to self-fund the second cochlear implant as their research led them to believe that would be best for Liam. (It’s only since 2014 that bilateral cochlear implants are funded for children.)Liam was one of the first children to have behind-the-ear speech processors rather than the little backpacks.Now, Liam is in Year 12 at Wellington College and his favourite subjects is digital technology, and is part of the school's IT crew, helping fellow students when they have issues with their Chromebook or Wi-Fi and taking care of the audio/visual requirements for school assemblies and presentations. Thanks for sharing your story with us Liam. If you would like to share your cochlear implant journey, we'd love to hear from you. Contact us via our website www.scip.co.nzPictured: Liam Melvin and his parents Susan and Mark Photo: Lance Lawson Photography ... See MoreSee Less